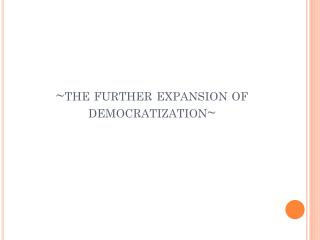 ~the further expansion of democratization~

~the further expansion of democratization~. Outline. Does democratizations continue and make the whole world democratized? If the third wave came to a halt, would it be followed by a significant third reverse wave? 1 . Third Wave Causes: Continuing, Weakening, Changing?

~the further expansion of democratization~

Referendum, Response and Consequences for Sudan: The Game between Juba and Khartoum - . ibrahim elbadawi, gary milante

Political and Legal Systems (Miller Chapter 8) - . the big questions. what does political anthropology cover? what is the

The Road to the Civil War - . trends in antebellum america: 1810-1860. new intellectual and religious movements. social

Manifest Destiny - . warm –up . grab a sheet off the red stool and begin working!!!. trends in antebellum america:

Rights and responsibilities of citizens in the United States of America - . review powerpoint for civics eight summer