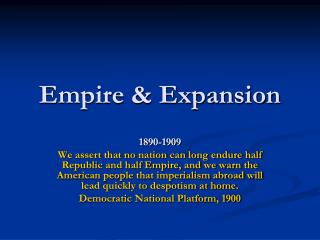 Empire & Expansion. 1890-1909 We assert that no nation can long endure half Republic and half Empire, and we warn the American people that imperialism abroad will lead quickly to despotism at home. Democratic National Platform, 1900. Post –Civil War America. Expansion Bus - . chapter 6. overview. in this chapter, you will learn to identify the structure and function of the

Expansion Bus - . chapter 6. overview. in this chapter, you will learn to identify the structure and function of the

The Byzantine Empire - . one god, one empire, one religion. the eastern empire. as western europe succumbed to the

US Expansion - . acquisition of empire. the need for bird $ ħ! τ !. in the state of the union address of 1850 president

Byzantine Empire - . continuation of rome and foundation of the middle ages from the 7 th c . eastern roman empire

The Fall of the Roman Empire - . the fall of the empire happens in 3 parts. the empire becomes weak. two leaders return

The Expansion and Fall of Rome - . chapter 2 p.52-56. the rise and expansion of rome. lesson 2 decline and fall of the

Expansion: Good or Bad? - . in your notebooks – write a response to this. what are some problems that an empire or

T he Mughal Empire - . maryjane gutierrez. basic facts. was founded in 1526 by babur located in present day india the

Muslim Expansion into India - . dehli sultans, mongol invasions, and the mughal empire. empires of south asia. during the