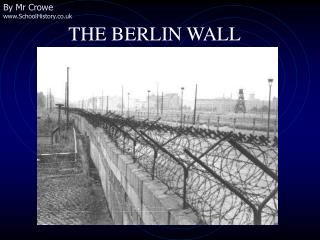 By Mr Crowe www.SchoolHistory.co.uk. THE BERLIN WALL. Another Cold War crisis. Background East – West rivalry Berlin divided – contrast the two halves. WEST: Prosperous, helped by US, attracted people from the East. Seen by USSR as infection in the heart of Communist East Germany.

The Berlin Blockade and the Berlin Wall - . the cold war. this icon indicates the slide contains activities created in

The Wall Came Tumbling Down The Fall of the Berlin Wall &amp; the End of the Cold War - . ussr 1985. soviet standard