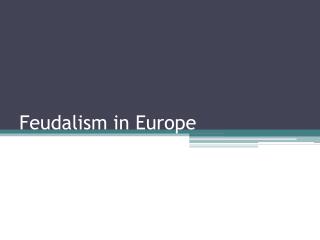 Feudalism in Europe . The Vikings Invade from the North . From 800-1000 invasions destroyed the Carolingian Empire. Muslim invaders from the south seized Sicily and raided Italy Magyar invaders struck from the East Vikings invaded from the North.

Feudalism : Japan and Europe - . political system of local government based on the granting of land in return for

Development of Feudalism in Europe - . starting with a story. becoming a

European Feudalism - . ap world history – unit 2. cause and effect. cause – fall of rome evidence no central

Feudalism in Europe - . mrs. page. after the “fall” of rome most of europe fell into the dark ages but there were

Aim: How did feudalism represent a response to changing conditions in Europe? - . do now: feudal relationships 1-3.

Feudalism in Europe - . today’s target. i can… explain why feudalism began in europe. identify characteristics of

What is Feudalism? - . review of last day. william the conqueror vs. harold godwinson at the battle of hastings.

Feudal Society in Europe - . medieval europe. why was feudalism necessary?. after the roman empire collapsed, europe had

Section 2: Feudalism in Europe - Feudalism, a political and economic system based on land-holding and protective

A Comparison of Feudalism in Western Europe and Japan - . what is feudalism?. a political system in which nobles are