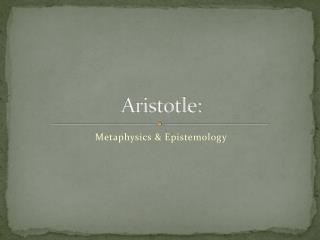 Aristotle:. Metaphysics & Epistemology. Why do we ask these questions?. "A Sense of wonder started men philosophizing in ancient times as well as today.... What is the result of this puzzlement? An awesome feeling of ignorance. Men began to philosophize, therefore to escape ignorance...." Science 9 - . reproduction. history of theories of the cell. aristotle (4th century bc)- believe in spontaneous

Chapter 5 Semantics - . 5.1 definition of semantics. semantics is the study of meaning in language. meaning has been

Free Fall - Ch 5.4 - . does a falling object fall at constant speed or does it accelerate as it falls? how do you know?.

Attention in Psychology: I Historical Background - . attention was one of the first concepts to appear in psychology