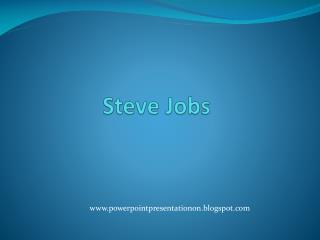 Transformational Leadership Example: Steve Jobs - . “innovation distinguishes between a leader and a follower” -

Steve Jobs - . classifying a famous icon. outline. introduction: what did steve job do ? is jobs a hero? zimbardian

“I’m a fruitarian and I will only eat leaves picked by virgins in the moonlight!” - . “this is shit!”. steve

The ART of Presenting - . go to the website: http :// www.mindtools.com/pages/article/newcs_96.htm score interpretation.

Steve Jobs - . an american entrepreneur and inventor, steve jobs was the co-founder, chairman and ceo of the widely

Steve Jobs - . steve jobs was an american entrepreneur, marketer and inventor, who was the co-founder, chairman and ceo

Steve jobs notes - . deven swiergiel. 1. how do we define the personality traits of a