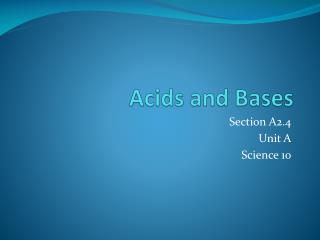 Chapter 16: Equilibria in Solutions of Weak Acids and Bases - . weak acids. all weak acids behave the same way in aqueous

Nucleotides and Nucleic Acids - . the basics. nucleic acids were first isolated by friedrich miescher in 1869.

Relative Strengths of Organic Acids and Bases - . background knowledge for today: proton based definition of an acid is?

Acids Lesson 22 Subtle Items - . 1. weak bases neutralize a strong acid as well as a strong base would. subtle acid

Chapter 3 An Introduction to Organic Reactions: Acids and Bases - . reactions and their mechanisms there are four general