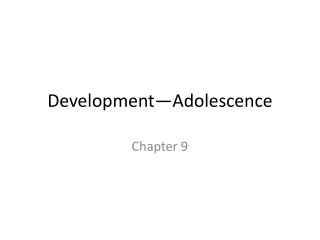 Attachment in Adolescence: An Agenda for Research and Intervention - . ronald jay werner-wilson, ph.d. based on material

Theories of Development - The developing person through childhood and adolescence by kathleen stassen berger. seventh

Puberty and Adolescence - . othman mohamed omair ali alfaqiri. puberty : is the process of physical changes by which a