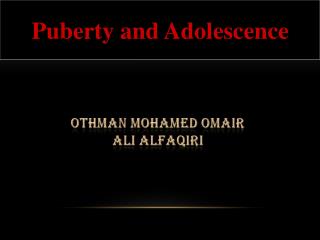 Puberty and Adolescence. OTHMAN MOHAMED OMAIR ALI ALFAQIRI. Puberty : is the process of physical changes by which a child 's body becomes an adult body capable of reproduction.

LOST SPRING by Anees Jung - . stories of stolen childhood. about the author. born in rourkela, spent her childhood and

Stages of Life: Infancy to Late Adulthood - . do now:. on a piece of paper, finish the following statements with at

Theories of Development - The developing person through childhood and adolescence by kathleen stassen berger. seventh

Attachment in Adolescence: An Agenda for Research and Intervention - . ronald jay werner-wilson, ph.d. based on material