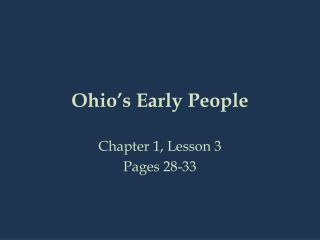 Ohio ’ s Early People. Chapter 1, Lesson 3 Pages 28-33. A Long Time Ago. Thousands of years ago, Earth had long periods of freezing cold  Ice Ages What happened to the Earth? A “ bridge ” of dry land appeared between Asian and what is now Alaska. A Long Time Ago. Colonization to Reconstruction: Early U.S. History Review - . columbus’s arrival. 1492 landed on an island in the

The Early History of Canada - . lesson 1 early exploration. one thousand years ago, people who lived in one area knew

More than 4,200 people were evacuated from the listing vessel early Saturday, and at least three deaths have been - Med