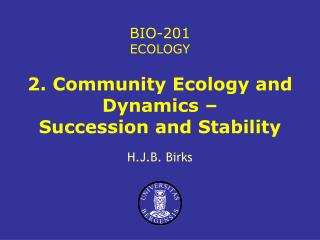 4.3 Succession - . how ecosystems recover from disturbances. primary &amp; secondary succession. what is ecological

Review of the Ecology Unit - . post falls high school biology. what is ecology? the. ecology- the study of interactions

Oral Microbial Ecology - . ecology. ecology  (from greek) is the scientific study of interactions among organisms and

Population Ecology 1 - . intraspecific population ecology: properties of populations a population is a group of organisms