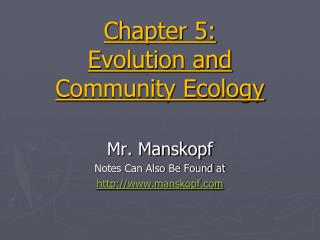 Ecology and Evolution - . chapter 4. ecosystems-everything is connected. all organisms are linked to each other in a

Evolution and Ecology - . it is not the strongest of the species that survives, nor the most intelligent that survives.

Chapter 53 COMMUNITY ECOLOGY - Communities. without the interference of other species, populations tend to regulate

Chapter 53 COMMUNITY ECOLOGY - Communities. without the interference of other species, populations tend to regulate

Evolution and Ecology - . 6 evolution and ecology. case study: trophy hunting what is evolution? mechanisms of evolution

Evolution and Ecology - . the fur of the snowshoe rabbit changes to a lighter color in the winter. this allows the rabbit

Ecology and evolution - . topic 5.1 communities and ecosystems. some useful definitions:. species – a group of

Chapter 7 Community Ecology - . by anna kimsey. what determines number of species in a community?. species richness : the

Topic 5: Ecology and Evolution - . 5.3 populations. 5.3.1 outline how population size is affected by natality,

Topic 5: Ecology and evolution - . 5.1 communities and ecosystems. autotrophs vs hetertrophs. what do these words mean?

Chapter 54 – Community Ecology - . concept 54.1: community interactions are classified by whether they help, harm, or