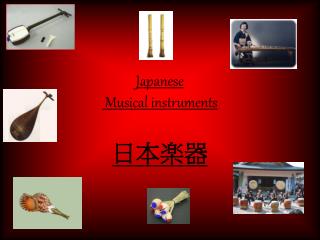 Japanese Musical instruments. 日本楽器. Shamisen ( 三味線 ). The shamisen is of similar length to a guitar ( ギター ) but its neck is much thinner and it has no frets. It has a Drum like rounded body, know as the dō, it is covered front and Asian Music What is it? What instruments are used in it? - . asian music. where is japan?. japan. koto- a string

Chapter 11: Introduction to the Region - . shakuhachi - the traditional vertical bamboo flute of japan the music of the

MUSICAL INSTRUMENTS - . 8 kinds of visayan musical instruments. -four were very quiet instruments and so were played

The Music and Musical Instruments of the Native Americans - Purposes of native american music. ceremonialsocial