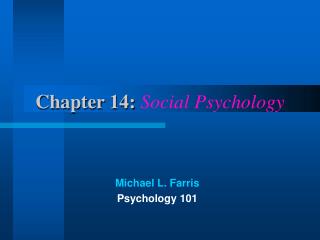 Chapter 14: Social Psychology. Michael L. Farris Psychology 101. Did you know that…. Revealing too much about yourself when first meeting someone can convey a negative impression? (Nevid, p.482) Social Psychology - . the tremendous power of the situation. what is social psych?. branch of psychology concerned with