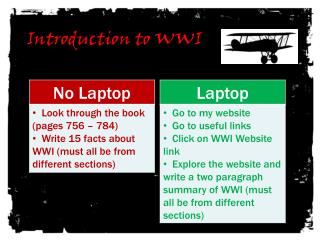 Introduction to WWI. Warm Up. STUDY for Napoleon/Ind. Rev. Quiz Look at my useful links for a practice quiz If your friend got in a fight, would you jump in and help them? Why or why not? Agenda Notes/PowerPoint WWI Causes activity Exit Quiz. World War I. “The war to end all wars”. WWI. Introduction to WWI - . warm up. study for napoleon/ind. rev. quiz look at my useful links for a practice quiz if your

Opposition to WWI - . “if soldiers all were pugilists…”. opposition to wwi. many people in the u.s. were initially

Taft to wwi - Buckle up. taft to wwi. the taft presidency . election of 1908…roosevelt had just served 2 terms william

Countdown to WWI - . the unification of germany. franco-prussian wars of 1870-1871 germany establishes itself as a main

Pre-Conditions to WWI - . what starts the war?. advances during wwi. new strategy and technology.

Pre-Conditions to WWI - . what starts the war?. changes. growing imperialism leads to a race for foreign conquest