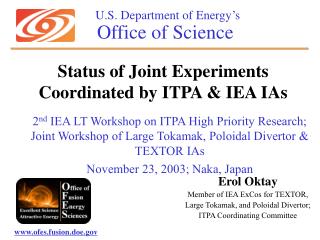 NIH Office of Biotechnology Activities - . within the office of science policy, office of the director, nih five

Energy - . chapter 13. section 13-1. what is net energy and why is it important?. basic science: net energy is the only

Kinetic Energy and Work - . chapter 7. introduction to energy. the concept of energy is one of the most important topics

DEPARTMENT OF ENERGY - . presentation of the 2011/12 mtef strategic plan to the select committee on economic development

Department of Veterans Affairs Section 508 Program Office - . access for everyone!. www.section508.va.gov. office of