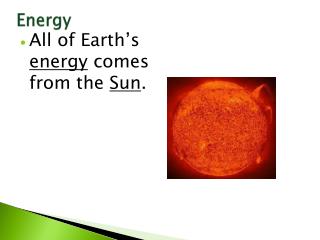 Energy. All of Earth’s energy comes from the Sun . Nature of Energy. Living organisms need energy for growth and movement. The Law of Conservation of Energy. Energy can be neither created nor destroyed it can only be converted from one form to another. Energy conversions.