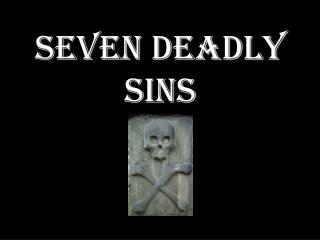 Seven Deadly Sins. Self-Destructive Behaviors. A "sin" in the context of Thomas of Aquinas , can be defined as "something human beings do which causes them to be unreasonable and unhappy." Another way to define "sin" is Environmental Science - . swallowed by the earth by juan carlo castro the land has taken a thousand lives brothers,