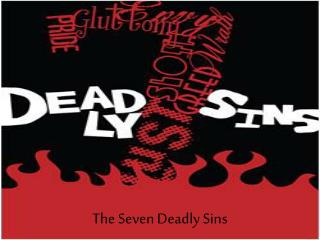 The Seven Deadly Sins. Explanation. Each of the seven deadly sins are normal emotions and everyone experiences them in daily life.  They are also motives that when taken too far can lead to terrible consequences. The Seven Deadly Sins of Plagiarism - . working honestly at dickinson college. fall 2008. why are we doing this?. to help

The 7 Deadly Sins of Performance Measurement - . by michael hammer. business

The 7 Deadly Sins - . as interpreted and painted by hieronymus bosch 1485 ce . 1. what do you already know about the

Present Differently - . 7 deadly sins of powerpoint. “ …it encourages presentation, not conversation… a strong

The Seven Deadly Sins of Plagiarism - . working honestly at dickinson college. why are we doing this?. to help you

Medieval Literature - . themes of medieval literature fall into several major categories which seem to reflect the

The Seven Deadly Sins of Bioinformatics - . professor carole goble carole.goble@manchester.ac.uk the university of

Slander and Gossip - . 2 deadly sins. how does god view gossip?. “a worthless person, a wicked man, goes about with

Estimation - . what to say when asked for an estimate “i’ll get back to you” pragmatic programmer. deadly sins