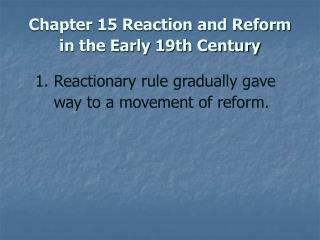 Chapter 15 Reaction and Reform in the Early 19th Century Chapter 15 Reaction and Reform in the Early 19th Century. 1. Reactionary rule gradually gave way to a movement of reform.

Chapter 15 Reaction and Reform in the Early 19th Century

Chapter two - . early societies in southwest asia and early african societies. i- the quest for order. a. mesopotamia:

Chapter 6 Thermochemistry - . contents and concepts. understanding heats of reaction the first part of the chapter lays

Chapter 9 - . working for reform 1820-1860. objectives. describe the main characteristics of the mormons understand what

CATALYSIS I . The HYDROFORMYLATION REACTION - . the hydroformylation reaction. oldest process still in use responsible

Chapter 26: Toward A New Century - . section 1: reinventing government. 1. . towards the end of the century many

Chapter 15 - . state building and the search for order in the seventeenth century. social crises, war, and rebellions.

CHAPTER 19 THE BEGINNINGS OF MODERNIZATION: INDUSTRIALIZATION AND NATIONALISM IN THE 19th C - . focus question. what were

Compromise and Conflict in the early 19 th century (early 1800s) - . what compromise drew an east-west line through