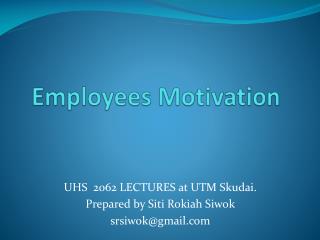 SUPERVISION &amp; MOTIVATION OF EMPLOYEES - . previous supervision philosophy suggested no one person should

Helping your employees find their motivation - From time to time, every organization needs to help employees stay focused

Explain the motivation of these three employees in terms of the expectancy theory of motivation - Assignment solutions,

Why does the motivation level in employees matter the most? - Companies print employee card and give them to the

Motivation - . lecture #15. haitian proverb:. if work was really good, the rich would have found a way to keep it to

Motivation - . motivation is the energizing force or impetus that causes an organism to act. as such, motivational

MOTIVATION - Chapter 8. motivation. what is motivation and why is it important? name and discuss the essence of external