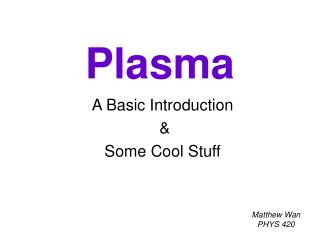 Plasma. A Basic Introduction & Some Cool Stuff. Matthew Wan PHYS 420. What Is It?. A hot ionized gas The ‘fourth state of matter’ Unlike gases, solids, or liquids, plasma does not contain molecules Instead, it is a gas that is composed of ions Plasma - . electrons are free! … a fourth state of matter: not gas, not liquid, not solid!. history, terminology,

PLASMA - . sherin wael d.isam al-ashqer. what is plasma?. what is

Plasma ! - . on earth, we live upon an island of “ordinary matter.” we have learned to exist using solids, liquids,

Plasma - . the fourth property of matter . sungjae cho, douglass cook. what is plasma?. a mixture of molecules and free

Plasma - . noun. stephanie hargrave. definition. the clear yellowish fluid portion of your blood or lymph in which cells

PLASMA TECHNOLOGY - Introduction. for the past many years, the majority of televisions have been built using the cathode