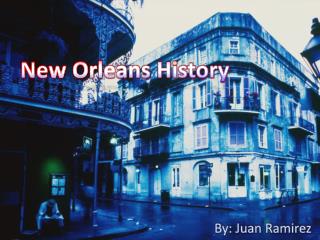 New Orleans History . By: Juan Ramirez. Establishment. Originally founded by the French Mississippi Company on May 7, 1718 to serve as a port. Original name was Nouvelle-Orleans, named after the then Regent of France – Phillip II, the Duke of Orleans.

Jazz – From New Orleans to Chicago to New York - . by mrs. walker. history. jazz is an early american music form that