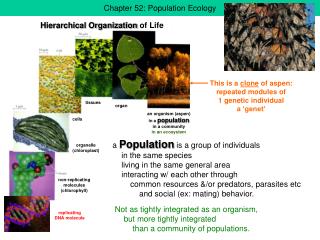 Chapter 52: Population Ecology. This is a clone of aspen: repeated modules of 1 genetic individual a ‘genet’. tissues. organ. an organism (aspen) in a population in a community in an ecosystem. cells. organelle (chloroplast). non-replicating molecules (chlorophyll). replicating Oral Microbial Ecology - . ecology. ecology  (from greek) is the scientific study of interactions among organisms and

Population Ecology 1 - . intraspecific population ecology: properties of populations a population is a group of organisms

Aquatic Ecology Notes - . chapter overview questions. what are the basic types of aquatic life zones and what factors

Review of the Ecology Unit - . post falls high school biology. what is ecology? the. ecology- the study of interactions