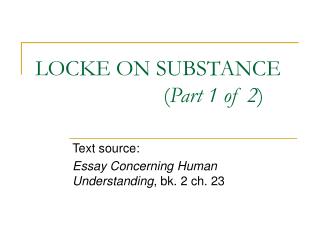 LOCKE ON SUBSTANCE ( Part 1 of 2 ). Text source: Essay Concerning Human Understanding , bk. 2 ch. 23. PROPERTIES (a.k.a. QUALITIES) AND SUBSTANCES. We think of the world as populated by properties (a.k.a. qualities ).