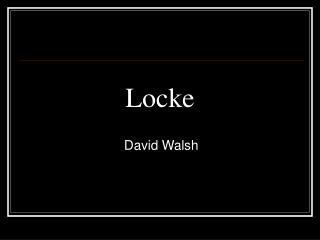 Locke David Walsh Life and Legacy: The Elusive Locke John Locke (1632 – 1704) is arguable the most influential of all political theorist. The success of liberal democracy and its embrace even by regimes that are founded on other principles reveals the power of his thought.

- Alain Locke - “ harlem is indeed the great mecca for the sight-seer; the pleasure seeker, the curious, the

John Locke - . rajan bhangu , hitan , manraj. who is john locke?. jon locke was a son of a puritan lawyer john locke was