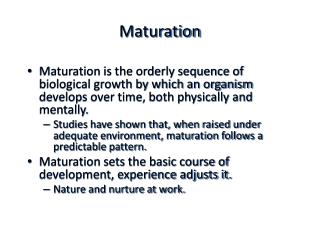 Maturation. Maturation is the orderly sequence of biological growth by which an organism develops over time, both physically and mentally. Studies have shown that, when raised under adequate environment, maturation follows a predictable pattern. Technology Maturation Plan - General instructions. each technology below the minimum trl must be addressed in the

GIRLS’ FIFTH GRADE MATURATION - . the following presentation has been approved by the granite school district. growing

Assembly, Maturation, and Release - . (getting it all together and leaving!). assembly. the final phase of the viral life

The Hobbit : Bilbo’s Maturation - . chapters 1-12 – points of significance. chapter 1: an unexpected party. in