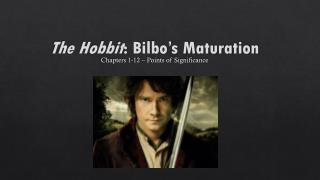 The Hobbit : Bilbo’s Maturation. Chapters 1-12 – Points of Significance. Chapter 1: An Unexpected Party. In chapter 1, it is clearly established both through Tolkien’s narration and Bilbo himself that hobbits, and Bilbo in particular, are not inclined to take part in adventures: Habituation and Classical Conditioning - . defining learning. learning is a relatively permanent change in behavior not

Chapter 6 PHYSICAL DEVELOPMENT: THE BRAIN, BODY, MOTOR SKILLS AND SEXUAL DEVELOPMENT - . an overview of maturation and

Growth, Maturation and the Development of Motor Skill - . measuring growth in length and stature. recumbent length is

Puberty - . clinic of reproduction and gynecology pomeranian medical academy iwona szydłowska. it is a physiological