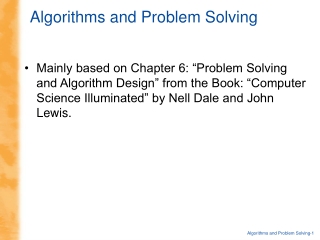 Algorithms and Problem Solving. Mainly based on Chapter 6: “Problem Solving and Algorithm Design” from the Book: “Computer Science Illuminated” by Nell Dale and John Lewis. Objectives. Determine whether a problem is suitable for a computer solution Problem Solving - . shortcuts through the problem space. problem solving. problem = a situation in which one is trying to

Problem-Solving by Searching - . uninformed (blind) search algorithms. project 1 is out, check class homepage due in two

Introduction to Algorithms - . algorithms. algorithms are ways of solving problems. there is a technical definition that

More on Algorithms and Problem Solving - . this presentation has been included to tie together the following concepts: