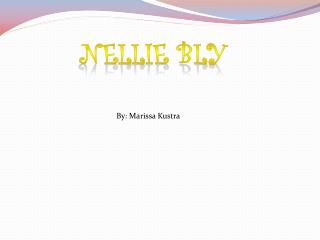 Nellie Bly. By: Marissa Kustra. Biography. Nellie Bly was born “Elizabeth Jane Cochran.” She was born May 5, 1864 in Cochran Mills, PA She was a journalist, author, industrialist and charity worker. Her spouse is Robert Seaman.

Ten Days in a Madhouse by Nellie Bly - . chrissie and beckie. 19 th and 20 th century

Patrina Bly - Spatial assessment of the gulf of mexico &amp; coral reef fisheries with an emphasis on the 2010