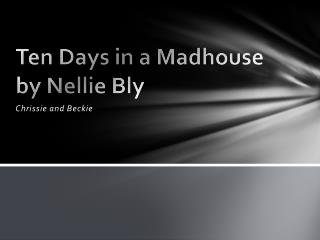 Ten Days in a Madhouse by Nellie Bly Ten Days in a Madhouse by Nellie Bly. Chrissie and Beckie. 19 th and 20 th century asylums.

Ten Days in a Madhouse by Nellie Bly

Early days in a placement - . module three: pre service training. re-cap of module two: understanding the past for a

10 DAYS IN A FOREIGN COUNTRY - . 15 of your church family challenged. touching lives…. salutations: thanks to the

Ten in a Bed - . there were ten in a bed and the little one said &quot;roll over, roll over&quot; so they all

Patrina Bly - Spatial assessment of the gulf of mexico &amp; coral reef fisheries with an emphasis on the 2010

Ten in a Bed - . powerpoint by camille page. there were 10 in a bed and the little one said, “roll over, roll over.”.

ALL in a Days Work… - . a hematology case study about leukemia by sarah wycoff. questions to consider:. how do you