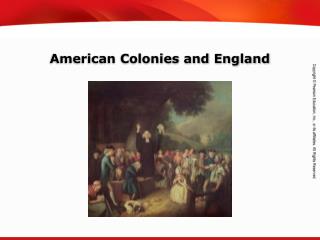 American Colonies and England. Objectives. Explore how English traditions influenced the development of colonial governments. Analyze the economic relationship between England and its colonies. Describe the influence of the Enlightenment and the Great Awakening on the 13 colonies.

Chapter 3 : The American Colonies Take Shape - . immigration and slavery 90% of migrants to english colonies from england

American Colonies vs. British Empire - . who should win the american war for independence? why?. american adv. gw’s

From Salutary Neglect to Taxation: The Causes of the American Revolution - . for many years, the colonies were treated

3.1 – England and its Colonies - Main idea. essential question. how did salutary neglect of the colonies after 1688

Britain and Her American Colonies - . unit 2. england and france. global rivals…had been at odds for hundreds of years

Colonies vs. England - . following the french and indian war… new british lands and the colonists desire to expand led

The Early American Colonies - . unit i. standards covered in this unit. ssush1 the student will describe european

The Northern Colonies - . the main idea the pilgrims founded colonies in massachusetts based on puritan religious ideals,