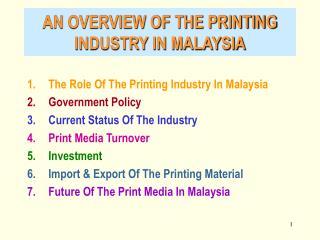 European Graphic Industry with a focus on Book Printing - . i nter g raf. 1. i nter g raf confederation for printing and

Screen Printing - . the process of forcing ink through a porous fabric and the open areas of a stencil to produce an

Careers in the Printing Industry - . why is it important to communicate?. objectives. understand the development of

Printing Services In Delhi - Looking for hiring the best printing services in dwarka, delhi then mentors house can be

Printing Company - Printing Press In Delhi - There are many online printing agencies that design your brochure, business