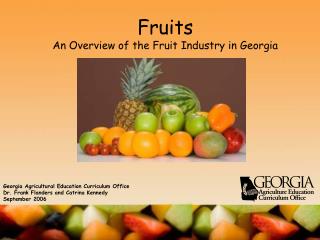 Fruits An Overview of the Fruit Industry in Georgia

Fruits An Overview of the Fruit Industry in Georgia Antioxidants – an overview - . antioxidants are molecules capable of reducing the causes or effects of oxidative stress

Fruit Development &amp; Dispersing Fruits and Seeds - . how to get around when you’re rooted in the ground. review

Grape Giggles  - . grape giggles are packs of seedless grapes. there are currently more than a dozen varieties of

Learning Target: Seed Dispersal - . i can … describe different ways that seeds can be dispersed and explain advantages