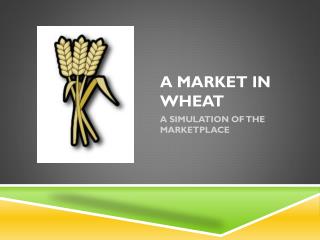 A Market in wheat. A SIMULATION OF THE MARKETPLACE. A Market in wheat (ROLES). Half the class are buyers The other half are sellers Two students will be record-keepers (one on the board; another on paper) IPM in wheat - . the eu requires ipm by 2014 - what does this mean???. blind chemical control schematic and routine