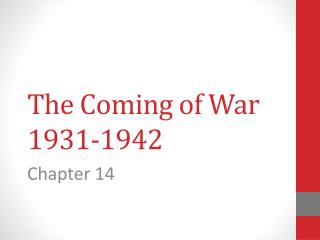 The Coming of War 1931-1942 . Chapter 14. Section 1: Dictators and War. Why it Matters. WWI and the Great Depression impacted almost every corner of the globe. Dictatorship and totalitarianism were able to grasp many states (nations).

Chapter 10 The Coming of War 1931 - 1942 - . section titles dictators and war from isolation to involvement america

DEMOCRATS AND DICTATORS - A booktalk by wendie gabay , head librarian. democrats and dictators. the hunted . by peter

Totalitarianism after WWI - . aftermath of world war i. europe was burdened by war debts. had to face the tough task of

Coming of Age Narratives - . purpose of the tale…. a coming of age narrative is a tale which focuses on the

Bildungsroman Or, the Coming of Age Novel - . … the goal is maturity (often synonymous with independence) , and the

The outsiders S.E. HINTON 1967 coming of age novel - . alexis r 5 th period r. setting. the streets that were dull and

1942 - . ames, iowa —the first electronic computer was finished in 1942, when the creator at iowa state university was

Totalitarian States - . life under a dictator curriculum outcome 5.1.3 – analyze and be able to explain the effects of

From Appeasement To War - . 14.1 notes. i. aggression goes unchecked. japan overruns manchuria league of nations does

The Russian Front Stalingrad, 1942-1943 - In russia on the eastern front, the german onslaught against the soviet union

From Appeasement to War 29.1 - . objective 1: identify and define appeasement. objective 2: summarize the ways in which