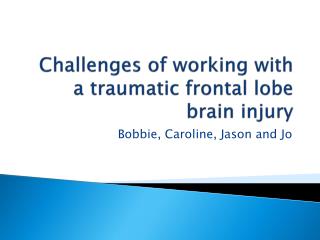 Are You Smarter Than a Millennial? The challenges of generations working and learning together - . daniel phelan and

Role of the Speech-Language Pathologist in the Recovery Process of Individuals with Traumatic Brain Injury - . jessica d.

Traumatic Brain Injury - . the effects of trauma to the skull and brain, during closed head injury depend upon a number

Cortical gyri and sulci - . from gray’s anatomy (the book!). peri-sylvian cortical areas are associated with language.