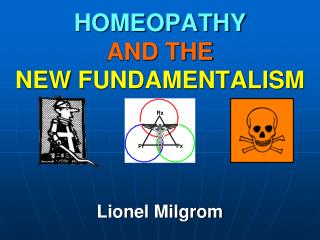 HOMEOPATHY AND THE NEW FUNDAMENTALISM HOMEOPATHY AND THE NEW FUNDAMENTALISM. Lionel Milgrom. The New Fundamentalism: what is it?. It is based on an extremely narrow interpretation of science and evidence-based medicine (EBM). It denies efficacy for any therapeutic modality that cannot be ‘proven’ in RCTs.

HOMEOPATHY AND THE NEW FUNDAMENTALISM The Intense eBook - It is a challenge for me to write in a way for lay people to not only understand, but also to trust

Homeopathy for Bronchitis - : homeopathy provides ewxcellent treatment for bronchitis without any side

Chapter 0: So what are we doing here?” - . my goal, give you example and practice in how science thinks and how we

29 males were also fundamentalists. - Contingency tables enable us to compare one characteristic of the sample, e.g.

The Roaring Twenties - . prohibition suffrage consumerism of the 1920’s the automobile culture youth sets the scene

Perspectives on Ideology - . ideologies. what ideas are behind your ideology?. do you believe in…. …your country?.

Alternative Medicine Homeopathy - . what is homeopathy? homeopathy: is a greek word. it is formed of two parts: ( homoios

The Placebo Effect - . homeopathy. in the late 1700’s a german doctor named samuel hahnemann invented a new form of