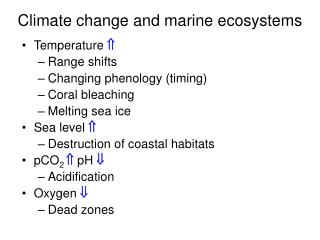 Muhammad Moazzam Khan - . importance of inland waters, lakes and marine fish species and the impact of climate change on

Ecosystems - . what do you know about ecosystems?. take a moment! write down or draw everything that you can think of

Module 1: What am I adapting to? - . understanding the impacts of climate change in the great lakes. intro | climate |