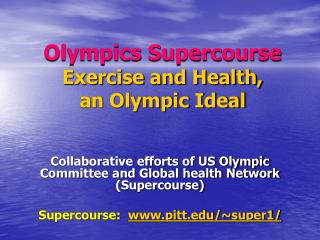 France at the Olympics - . french people refer to the olympics as ‘ les jeux olympiques ’ (the olympic games) or

Olympics 2012 - . by natasha patrick. in great britan. olympic events. there are different events in the olympics

The Winter Olympics - . the winter olympics is held in sochi, in r ussia. sochi is a beach resort. the olympic organisers

The Ancient Greek Olympics - . by luke wilson. the first olympics. the first ever olympic games were held at olympia, in

The Olympic Games - . chapter 11 section 1. the olympic games a. first games held in 776 bce at olympia, greece b. held

Olympic Problems - Olympic ideals the aim of the olympics is to promote: personal excellence sport as education cultural