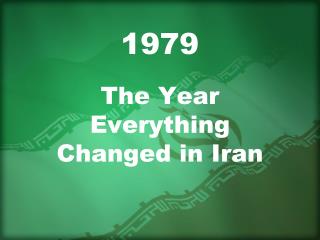 1979. The Year Everything Changed in Iran. A Trip Back in Time…. Sunni-Shia split – “struggle for the soul of Islam” Influences on democracy/globalization Iranian foreign policy Water and oil. Oil field in eastern Iran. Demographics. Sunni population 1.3 billion people At The Border, 1979 - . lo) to explore how hardi uses narrative structure to explore her relationship with her home

At the Border, 1979 - . summary of the poem. the poet describes how, at the age of five, she and her family crossed back

Britain 1850-1979 - . reasons for the growth of democracy. introduction. outline why britain could not be described as a