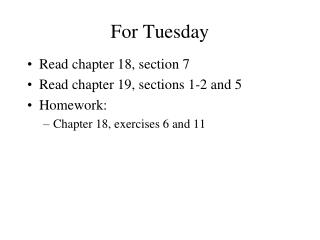 Tuesday, May 6, 2014 - . world asthma day is an annual awareness-raising event organized and sponsored by the global

ITU SEMINAR ON IMT TOWARDS 2020 AND BEYOND AGENDA FOR TUESDAY FEBRUARY 11, 2014, VIETNAM - . (one day seminar including

For Tuesday - . read salmon is everything , scenes 1-12 (page 1 through 52) read oregon quarterly (the magazine of the

Homework : Read/OL 18.2 for Tuesday after break - Frontpage : nnign. if you want to be insanely secure; simply choose

“DO NOW” FOR TUESDAY, FEBRUARY 4 TH - . what type of forces are necessary in order for an object to move? there are

Journal Topic for Tuesday, A pril 28 th : - . turn in your gatsby papers! get books ready to turn in. have you ever heard

Tuesday of the Other June - . dgp. monday. what do you notice about this sentence? what questions are the readers in the

Do Now for Tuesday, October 15th - . in your own words, how is the carbon atom recycled in nature?. guided notes for the

Journal Topic for Tuesday, November 6th: - . what is mla format? what is it used for? do you remember how to use it