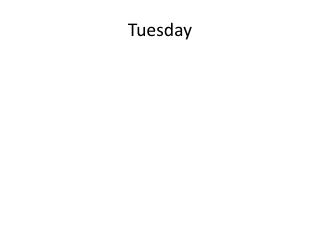 Tuesday - . calescite !. translate the following sentences from english to latin. the slave girl greets caecilius . i

TUESDAY - . current events because it’s been 4 days… pass the piggy – how was the long weekend?? quick notes on

Tuesday - . attending a un meeting – felix dodds session 5. the bureau. the members of the

Tuesday - . year 12 accounting. cash journals. warning…warning sac!. thursday p3? you are now in vce. if you are absent

Tuesday - . get a textbook get a notes sheet start filling in the vocabulary (top section). chapter 4-section 2. sources