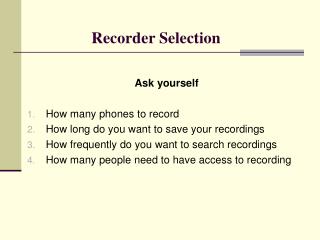 RECORDER MADNESS - . don’t you love it? :-). recorder belt program. for every song you learn to play and play

Recorder Karate - . 1 st year recorder program. what is recorder karate?. a program that helps us learn recorder in a

Flight recorder - . +. sand. record &amp; share in hd as you fly, the hd video is recorded and sent directly to your

Beginner Recorder - . getting started by mrs noble-coles. a note to parents: your child has started his/her recorder

Combination Recorder - Combi fdr/ cvr faa ac 20-141 paragraph (7) (d). a combination cvr/dfdr may not serve as both the

Security Recorder - Is a one-box appliance that provides a full-featured ip video surveillance system including viewing,