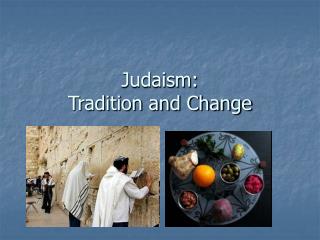 Judaism: Tradition and Change. Distinctive characteristics. Dialogical Jewish history is “a continuing dialogue with God” rooted in a covenant Both sides—people and God—participate Often takes the form of argument in the Bible and rabbinic writings

Tradition and Change in East Asia - . ming and qing dynasties and their interaction with europe. mongols in decline with

Tradition and Change in East Asia - . ming and qing dynasties and their interaction with europe. the rise of the ming.

Judaism and Christianity - . the semitic religious hearth. christianity, judaism, and islam all arose among

Jews and Judaism - . the jewish people share a unique culture and religion. judaism is based on the responsibility to:

Judaism and Islam - . judaism. -it is the first monotheistic religion (only worship one god) -main book/writings is the

Judaism and Hanukkah - . tradition. vary from country to country and even from family to family in general: menorah is a

JUDAISM AND CHRISTIANITY - 2. 4 interpretations of holy text. literalwhat does the text explicitly assert? ethical what

Israelites and Judaism - . monotheism. believed on one god (monotheism) god is everywhere god punished, but was merciful

Hebrew and Judaism - . chapter 2 section 3 pages 45-49. the hebrews and judaism. main idea the ancient hebrews and their

Judaism and Christianity - . history of judaism. written in the tanakh includes the “torah” – the first five books