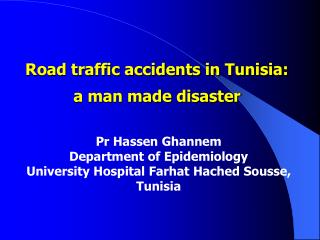 Road traffic accidents in Tunisia: a man made disaster

Road traffic accidents in Tunisia: a man made disaster

How To Avoid Car Accidents During Road Construction In Los Angeles? - Road construction workers face a plethora of

Man made disasters - . by jamie sansom. the fire of london. the 911. the tam express. buns field. the titanic. natural

CAKE Q3 Major accidents - . cake in practice :. a new movie will be sent offshore on a memory stick, but can also be

The Economic Impact Of Chindia on Maghreb countries (Morocco and Tunisia) - . tr a de flo ws. structure of moroccan and

The Workshop How to reduce the number of traffic accidents by 50 during 3 years Integration of Road Safety Audit in - . .