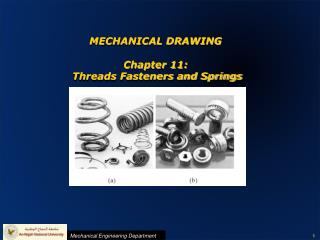 MECHANICAL DRAWING Chapter 11: Threads Fasteners and Springs. Objectives of threads and fasteners. 1. To hold parts together (Assembly). 3. To transmit power . 2. To provide for adjustment between parts (Drum). Chapter Objectives. Define and label the parts of a screw thread

Types of Screws - A screw is a fastener with a head on one end and a pointed tip on the other end. screws have threads

Threads, Fasteners, &amp; Springs - . what type is the fastener?. permanent welding gluing riveting nail. is it a

Chapter 11 - . fasteners and springs. screw threads. helix or conical spiral formed on the external surface of a shaft or

Chapter 4: Threads - . adapted to cop4610 by robert van engelen. process versus thread. a process has its own address