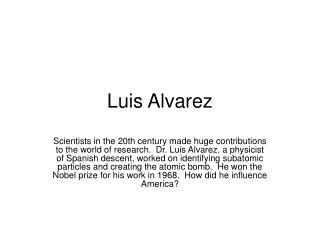 Luis Alvarez. Scientists in the 20th century made huge contributions to the world of research. Dr. Luis Alvarez, a physicist of Spanish descent, worked on identifying subatomic particles and creating the atomic bomb. He won the Nobel prize for his work in 1968. How did he influence America?. Contraception - . by: luis miguel Álvarez &amp; gabriela oliveros . what is a contraceptive ? types of

Luis Walter Alvarez - . by ellie peterson. born in the usa on june 13, 1911 received b.sc. from the university of