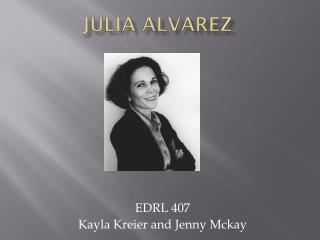 Julia Alvarez. EDRL 407 Kayla Kreier and Jenny Mckay. Personal History . Julia Alvarez was born in New York on March27, 1950. Moved to the Dominican Republic at three months old. Moved back to New York with her family at the age of 10. Spoke no English when she moved Julia Alvarez Biography - . by sam willsey. her roots and origin. she was born on march 27, 1950 while being born in new

“Liberty” By Julia Alvarez - . before, during, and after reading skills. student response “liberty” read the text

“Liberty” By Julia Alvarez - . before, during, and after reading skills. literary response “liberty” read the

“Names, Nombres ” by Julia Alvarez - . vocabulary and story map power point. (adv) – in a way that is contrary to

“Names/Nombres” by Julia Alvarez - . a closer look at names. what is in a name?. juliet: &quot;what's in a

Luis Alvarez - . scientists in the 20th century made huge contributions to the world of research. dr. luis alvarez, a

JULIA - . ‘a bit of a playa…’. overview. purpose: used as a contrast to the duchess - both are with people they

Stephen Alvarez - . gabriela mendez. biography. stephen was born in his work appears the style he was does is global