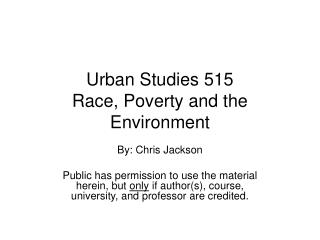 Urban Studies 515 Race, Poverty and the Environment By: Chris Jackson Public has permission to use the material herein, but only if author(s), course, university, and professor are credited. Environmental Injustice in Harlem The Placement of the North River Sewage Treatment Plant in Harlem

Vieques, Puerto Rico: The Social, Environmental, and Public Health Consequences of the US Navy Occupation - . sara